We first entered the field of hydrographic measurement technology in 2001 as a result of contacts with a north German harbour operator. The operator was seeking a measurement system to determine the sediments accumulating in the harbour basin over time, in order to evaluate the navigability of the basin. This interesting metrological challenge led to the development of the first prototype version of the admodus®USP pro (Ultrasound Sediment Profiler) probe.

The end of 2009 saw the beginning of the development of the admodus®USP pro, the successor to the admodus®USP probe. The admodus®USP pro system features some important technical improvements over its predecessor, resulting in measurements with significantly increased precision and stability. The user interface has also been completely revised and now allows for a partially automated measuring process.

admodus®MARITIME devices represent robust and reliable measurement technology at the highest level of engineering excellence. If you are searching for solutions to issues and problems in the maritime field, then please contact us – we would be delighted to help. 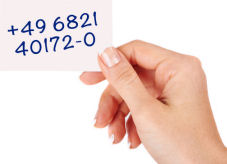