The admodus®SONAR can be operated as a self-contained echo sounder with a variety of different ransducers. Furthermore, it can be used as a passive digital supplement to existing analogue echo sounders.

All data are transferred in real time to a computer via Ethernet, then visualised and stored. In addition, the admodus®SONAR user software provides an interface with widely available surveying software programs such as QINSy, WinProfile and Profile2000, so that the horizons identified can also be externally recorded and further processed.

With its compact dimensions and the splash-proof design of its housing, the system is also highly suitable for mobile field work.

The area data capturing of the dual-frequency admodus®SONAR echo sounder, combined with the highly accurate point-by-point measurements achieved with the admodus®USP pro, is one of the most accurate methods currently available for hydrographic surveying. 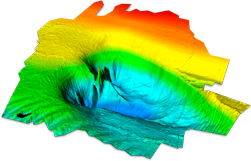 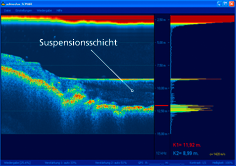